More blasting, round the poolside today

Had some roofing felt to replace today, bit cold to be up a ladder but it was the pool hut that houses the pool heater, so it's sort of sheltered from the wind - still nut freezing though!

Speaking of nuts, our littl'un, five year old Finlay has a mild bed wetting problem. Alison said to him the other night, "Do you know you are wetting the bed or does it just happen in your sleep? If you are awake, you could ask me to take you to the toilet you know." He replied in the only way a 5 year old can, "Willies don't have ears." Pause, "Or mouths, so they can't speak or hear if they are awake." Just an aside...

These are the scars I mentioned on the front moss-lawn at Pat's: 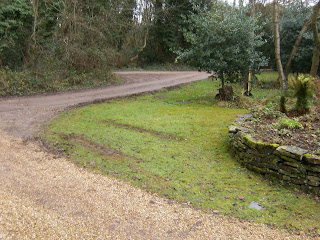 What a swine that taxi driver is. Quite frankly I could call him up and make a block booking for a bogus address.
Just up the gravel road - behind the holly bush on the top right - the next door neighbours have put posts in the ground and it works a treat. So, I think I will suggest it. That dark bit just above the scars is where a DHL van churned up the edge of the grass/moss. 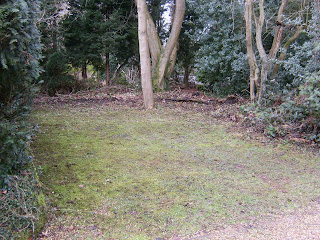 This is the other side of the drive, almost entirely moss. Yesterday it was covered in excessively mouldy birch tree leaves and took about two hours to clear. Luckily there is a large wood opposite Pat's house so the leaves go in there, spread in amongst the under growth. Sometime I aim to have a nice bonfire over there, but I've never really had the time - I do ten hours a week here, Monday and Tuesday and I could easily work all week there. It's delightful!
There follows a homage to the Karcher - I am obsessed...
﻿
﻿ ﻿﻿﻿ ﻿﻿
Zap that algae! POW! No more slippy slidey; no more zoosporangium multiplying willy nilly all over the path. Well, not until later today anyway!
Next week, I am attacking the compost heap at Pat's. It's huge and never been used properly. I intend on digging it over and seeing how much I can chuck on the borders. The heap is about ten foot by six and three foot deep and, like I say hasn't been touched for years. There's grass cuttings and leaves mostly in it but the oldest stuff in there is probably upwards of ten years old. Can't wait to get stuck in. Pictures to come...
Like say, happy digging!
Posted by SimonM-Isaacs at Tuesday, January 25, 2011 2 comments: