...I keep forgetting to blog. That's not good blogging is it?

Here's some pictures from recent times... 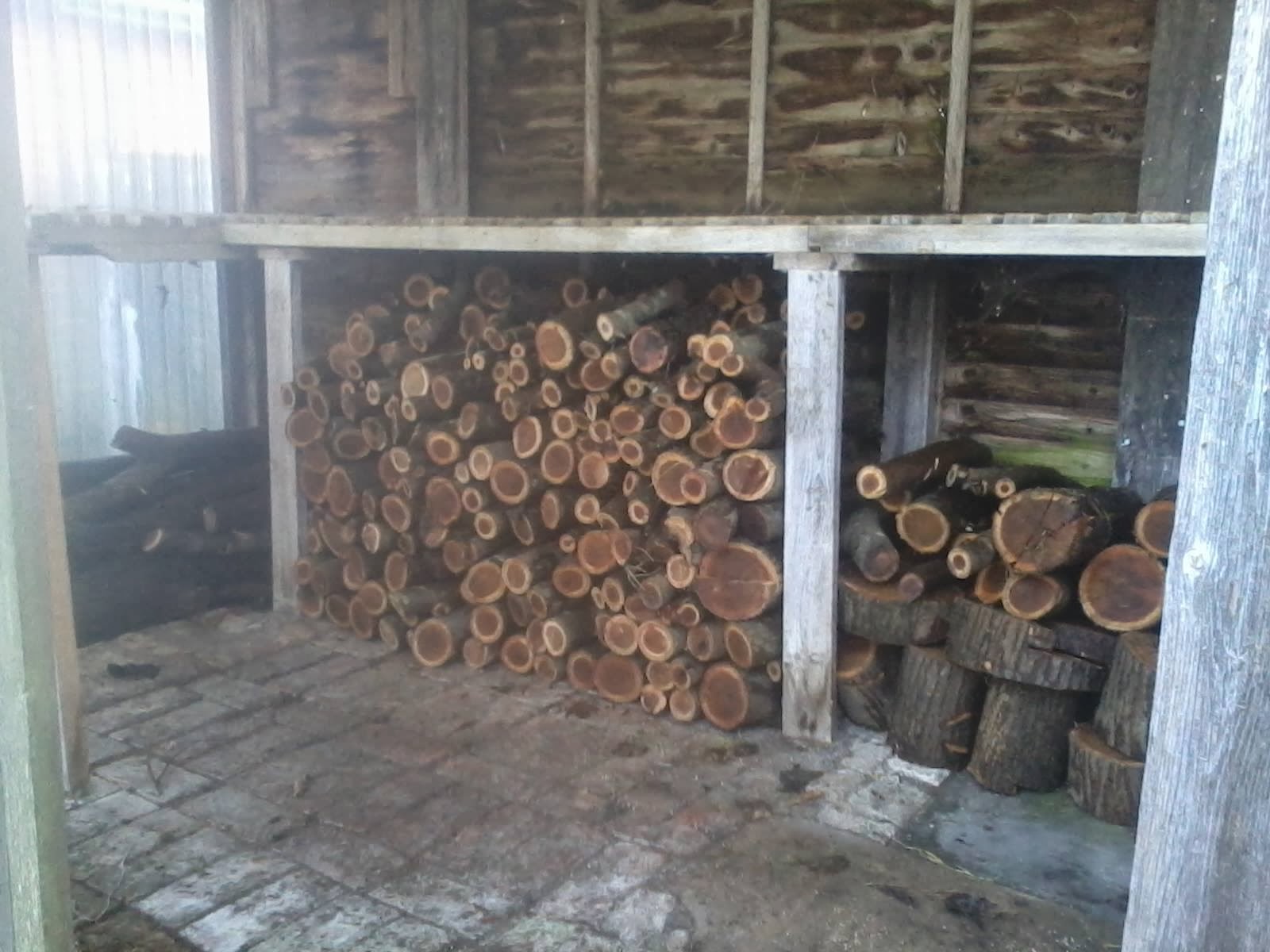 Strange winter really, I've only lost 2 days so far, not forgetting I have been totally drenched on several occasions, even with full waterproofs on. Just hasn't been cold enough to call it winter.

A guy who totally changed my life, one way or the other, died a while back and I went back to the scene of many long hours spent getting cold, wet and abused. Here I am with one of my dear comrades, Patrick, from the Non-Stop Picket outside SA House in Trafalgar Square...

This was on the day of Madiba's funeral. About 20 old picketers turned up, we had a sing, a coffee in the crypt of St Martin's in the Field and I felt like a big piece of my life had finally come to it's end. The picket and my comrades mean more to me than almost anything in my life. Only my family mean more. I love them all - even the RCG...

And finally, saw this in our local farm shop recently... 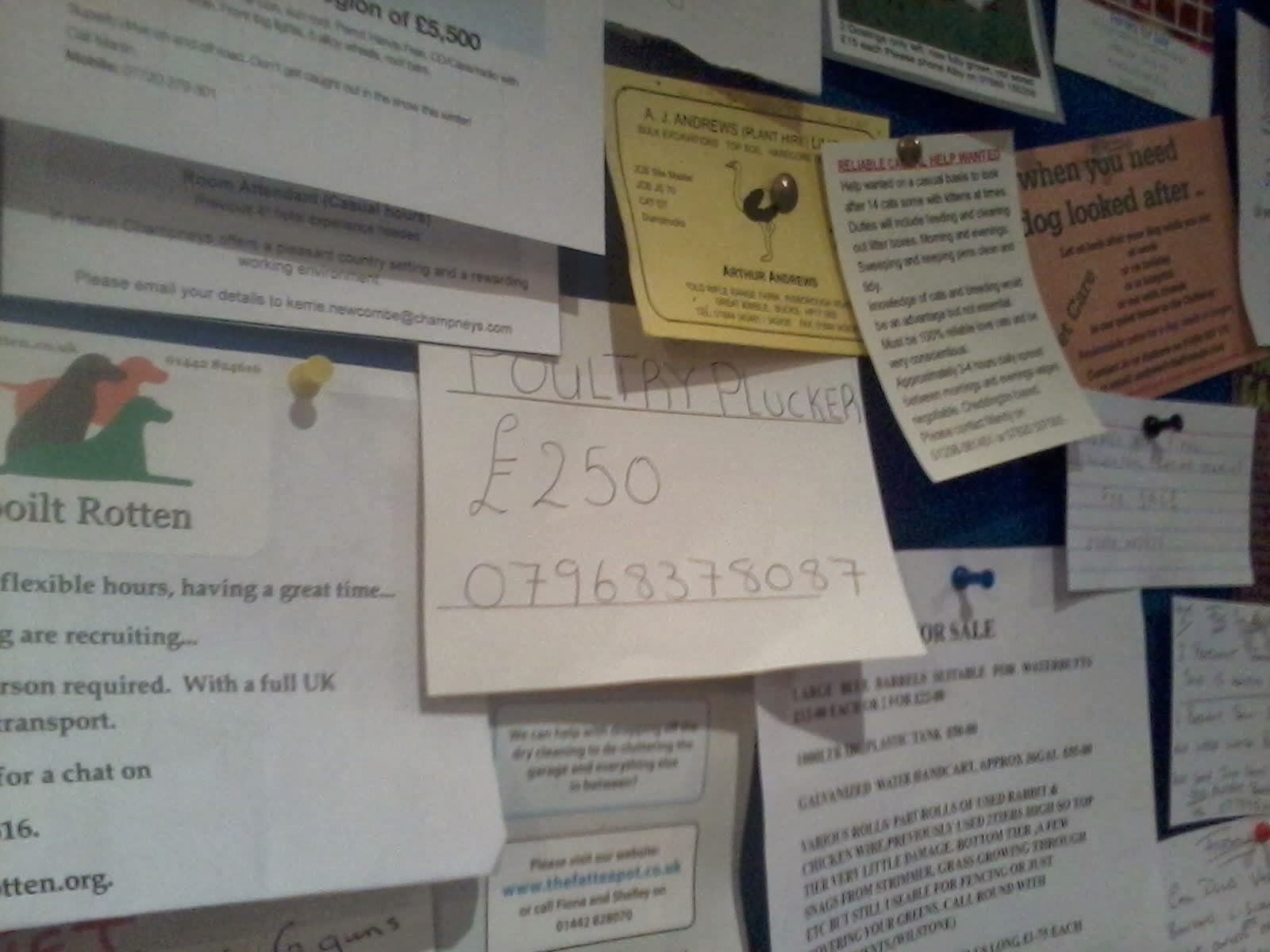 ...who would want to buy a Poultry Plucker at all, let alone for 250 quid!

A few new bits of work

All this year I have been resurrecting mostly lawns and have I learnt a lot? Yes I have.

The biggest thing I've learned is it's bloomin' hard work guv'nor. Raking out moss and thatch, removing old tired turf and laying new stuff, but most of all creating a new lawn with nothing but seed, fertiliser and a wing and a prayer.

The first of two I will show tonight dear reader is Quainton. This is the garden that has been thoroughly destroyed by very necessary building works and as you can see it really did look like the set of Blackadder Goes Forth. The Somme. 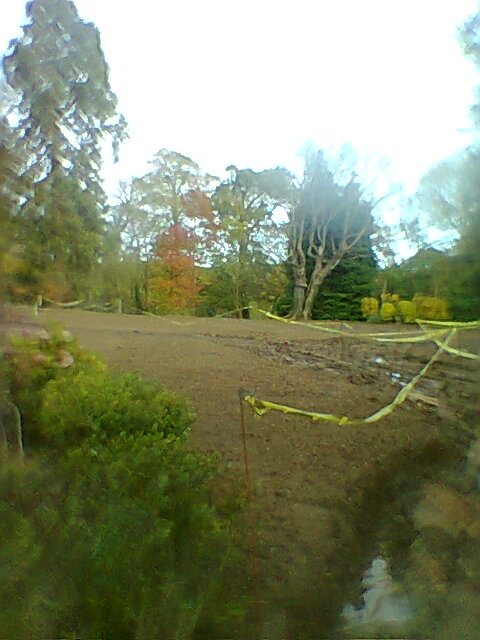 In June, with the help of a couple of the builders, we levelled the ground as much as possible and this is what it looks like in August (6th August, just six weeks later). 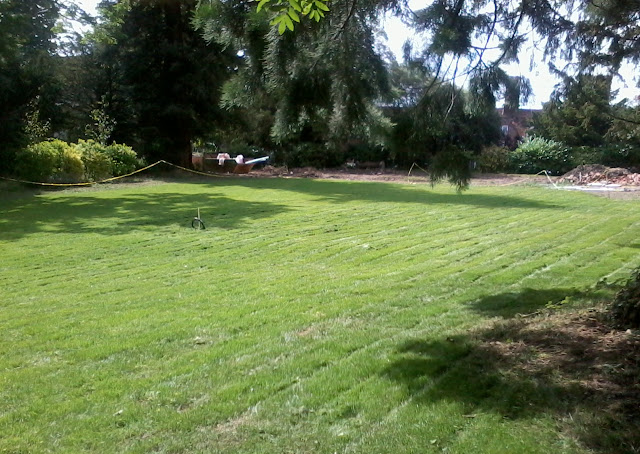 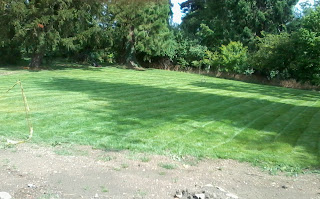 Obviously still a bit rough and there are still some patches but it is doing so well. The trench you see in the above shot ran right through the middle of the first of the new pictures. Isn't nature a wunnerful thing?

And the second revamped garden is in Tring and belongs to a couple of friends - stupidly I forgot to take some before shots, but trust me this is very different to what was there just two weeks ago. Again a major builder led catastrophe, but now a simple little garden that I think enhances the front... 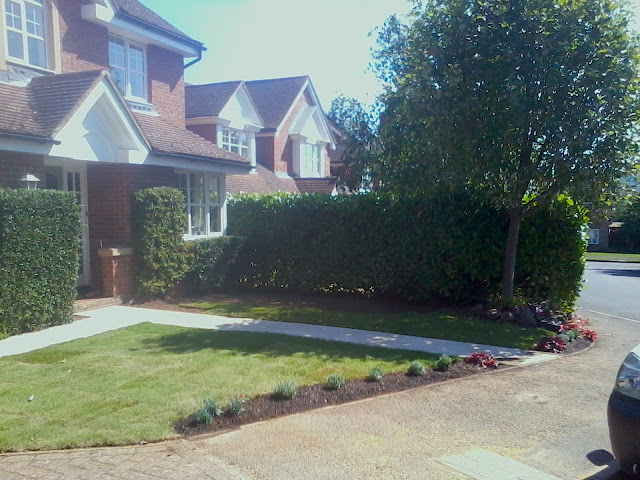 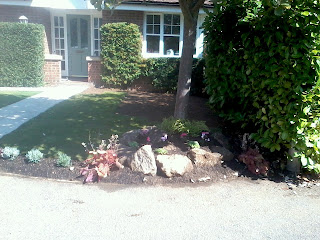 ...please ignore the bald bit on the far right, this was a hideously underestimated turf supply. Note finely trimmed hideous laurel hedge and topiary round the windows. I do like a bit trimming.

So pleased to be back writing this tosh, I will try to keep it up as I do enjoy it, not as much as the work, but it has it's ability to soothe my fevered brow. 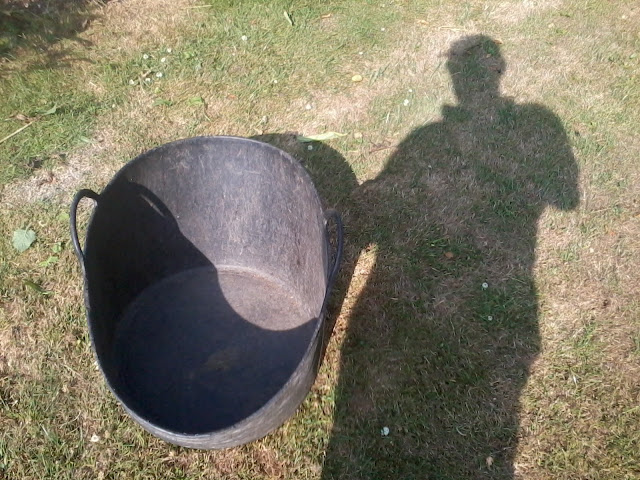 Oh trug, I'd like to give you a hug,
You lovely black plastic receptacle
That holds so much, in servitude
Of all that is hard work and acceptable
You sit there in obedience, waiting
Waiting for the detritus of my work
You never shirk or cry off sick
You that holds me in patience
So black, not white like a dove
A thing of beauty, a thing of love...

(Not really, but it is quite good - keep on trugging)

PS: Just one thing, if one more idiot posts a link to a poxy viagara website or a weird sexually deviant website or to some Nigerian based website advertising stuff I really don't want to know about...

...garden inferno at Quainton today. Perfect for a pyromaniac like me. I've been saving up tons of stuff, built a large bonfire and then set a match to it, woomph!

It looked not unlike this:


Must remember to take my camera to work more often, the one on the new phone is poxy, anyway the fire was splendid, lasted all day and caused no complaints for once, which is nice - not fond of people complaining.

Not long ago I was working on the old compost area at Quainton - which is now the new compost area (see below) - and this old-ish couple leant on the wall and commenced watching what I was doing. It got a bit unnerving after about five minutes, I had smiled but they kind of ignored that, so I said, "Can I help you?" "What you doing?" asked the man. "Clearing the compost area," I replied. "Why?" asked the man - the woman just frowned. "Why not?" I replied. "Just asking," she said. They then moved on. Bizarre some country folk. 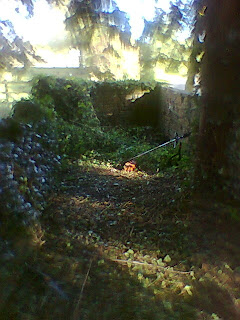 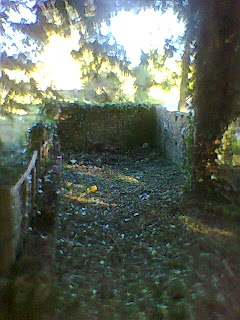 I hope to be remember to take the camera tomorrow, Thursday and Friday (yep, working Easter Friday and Monday too, bit hypocritical for an atheist not to really) just so I can update the gardens at Buckland, Hemel, Tring and Pat's in Berkhamsted...

Bloody hell, over three months since my last blog, that's shameless that is. It's not like I've been overly busy, just lazy as far as this is concerned. Shocking really.

In the past three weeks I have been mainly up to my ankles in compost, digging it over and loading up wheel barrows full and transporting all round the four main gardens I work on. It's been a delight really, especially this week when it's actually been cold enough to be winter. However, I did give up on Monday afternoon, digging a vegetable plot in a blizzard (sort of), but back there tomorrow to finish it off.

Did I ever mention I like compost? Especially when I have made it - not literally of course, but from rotting leaves, grass cuttings and the like...

It's been sooooo cold recently, but I have been able to keep up the work on the four major gardens in Berkhamsted (Pat's place), Quainton (Rebecca), Dancer's End Tring and Julie's at Buckland. And, just as a reminder, if only for myself, this is what they look like in nice weather!

Anyway, I aim to get back into regular blogging again. I think the weather has got to me in such a way as to freeze not only my fingers but also my brain.

I knew it! There was a reason I'm doing this now...

OK, it's from the Daily Mail so perhaps one would doubt the voracity of this story, but yep, I have never been happier at work. Every day brings something new and every day I end up having done something I can see the results of my labours - and it's always appreciated too.

Working at Argos on that brick they call a catalogue, I would flick through it thinking, "18,000 products in here, I don't want one of them..." Whereas, I can look back at my days work in any one of my lovely gardens and think, "Ahhhhh, that's nice!"

I think the following pictures from this year are tantamount to that statement: 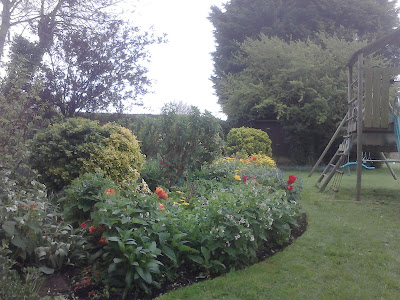 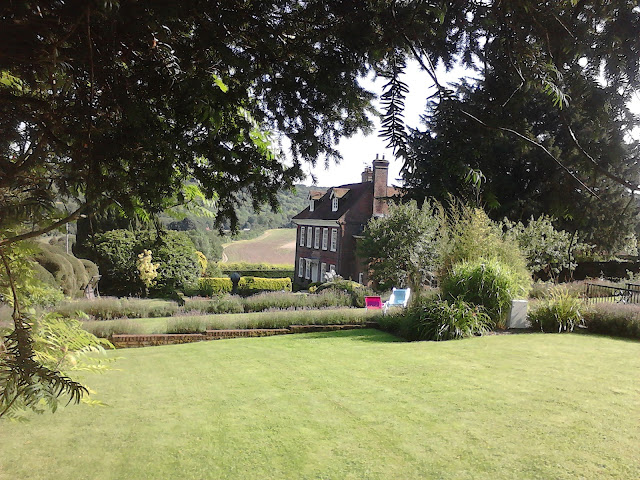 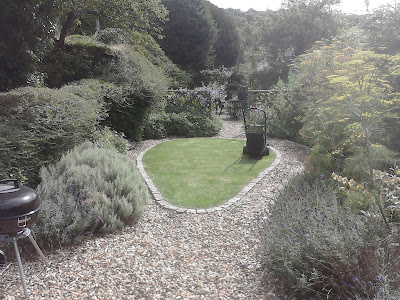 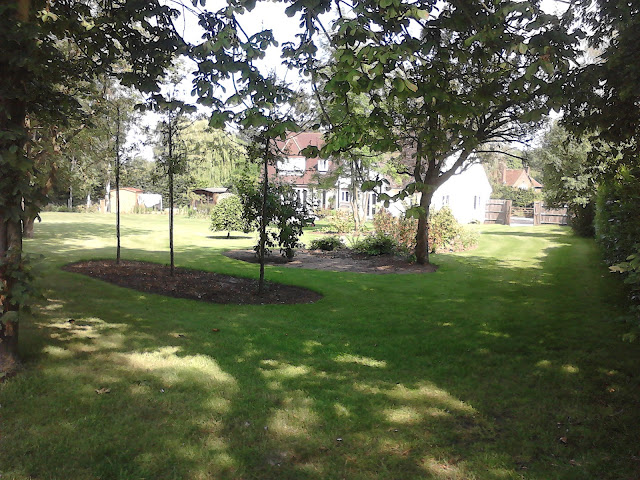 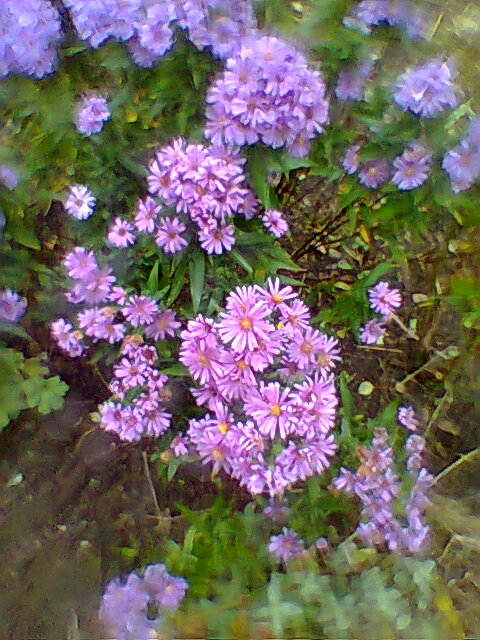 I do have such fun you know. Take today for example, on my way to Quainton (see below) I got stuck behind a cab that kept speeding up, slowing down; speeding up, slowing down. I assumed he was looking for somewhere, the home of his next fare for instance. But no. Oh no, this cab driver was in front of me for five, going on 25 miles - that's what it felt like.

We got to the new hideous estate just the other side of Aylesbury (see this link: http://simonmurraygardenservices.blogspot.co.uk/2012/06/i-promise-not-to-mention-weather-part.html) where there is a single track road with road works and a set of traffic lights. The lights turned red and said cab driver stopped in such a place as to make it near on impossible for the traffic coming from the opposite end of the road to get passed him. Stand off.

After a couple of minutes two rather large blokes got out of their cars and asked him to back up. Nothing. I got out and tapped on his window. He put his hand up and refused to even look at me. He was Indian, so unfortunately the two blokes got a tad racist.

I said,"He's a fuckwit because he's a fuckwit, not because he's Indian." The two blokes looked like they were going to take out their frustration on me, so I went back to my car. Thankfully the cabbie did back up enough for the on-coming deluge of cars to get passed.

Of course, after this protracted interlude, the lights had not only changed to green from our way, they had changed to red again, so we couldn't move. I say we, but the cabbie decided he would go anyway, meeting yet another line of on-coming traffic halfway. More stand off; more shouting; more I was thinking that I would never get to Quainton, a mere mile or so from the "beauty" of Kingsfield Park. He backed up, very slowly, after one of the workmen from the building site had "had a word".

To cut a very long story short, we eventually got through the road works, on to the estate and he indicated that he was going to turn left into an unfinished road with about ten unfinished houses. He stopped. I hooted. He waved his hand at me again; my blood pressure started to rise - I mean I can take a joke, but fuck a pantomime!

He moved on at about 6mph and then indicated right, stopped, an on coming car full of kids and an irate looking mother nearly hit him. Then he moved on nearly hitting them. I was now beside myself with something akin to tourettes-a-gogo and would have stopped and let the bugger do whatever he was trying to do , but there were about 20 cars behind now.

Finally the cabbie turned right at the next road and I put my foot down. The last I saw of him was in the rear view mirror with one of the 20 cars chasing after him flashing his lights and hooting like a walrus on heat.

The legend on the back of the cabbie's car? "Serving Aylesbury for 25 years - exemplary!" Whatever that means...

Anyway, I'm happy, are you?
Posted by SimonM-Isaacs at Tuesday, November 13, 2012 No comments:

...take a pen and piece of paper with you when you know you are going to ring up to check on an account and you forgot all the details and had to ring home to get them. 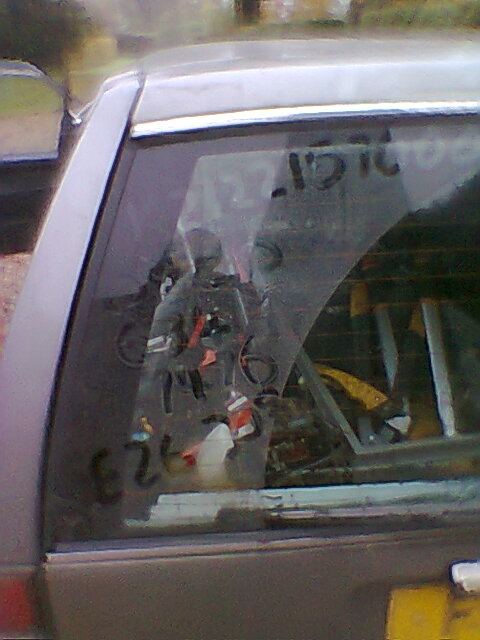 Then, you won't have to write in the muck on your car's back window. I think this shall be my new motto.

Also, don't do this any more, as I think you may have bought about six pairs of secateurs this year. Luckily, this time, I found them. I should get a gardening utility belt, but then again, I look too much of a prat already, so perhaps I won't

On a political note, we got our polling cards for the forthcoming PCC elections. Apparently this is an acronym for Police and Crime Commissioner. OK, I'm not overly intelligent I know, but does that mean we're voting for people to commission crime? Which is bad enough, but commission the police too! I mean, what IS this bloody country coming too?

On that note I shall wish you well and bid you a safe journey home.