I'm not gonna lie, oh no. I'm not even gonna give any lame excuse. I just couldn't be bothered to write anything in the past 3 weeks or so, but, fear not (as if) here I am and here's that bunch of grapes I've been monitoring at Julie's lovely place (400 year old cottage in 5 acres, with the lovely pond - more of that later).


Stupidly forgot to take one today, but I have to say the wasps are beginning to have an effect. However, I am determined to get at least enough for one bottle of wine, Julie and Andrew don't bother with them you see, not even to eat!


Well, it's been busy out there in the land of the garden. I have had so much work I think I'll actually be able to pay my tax bill this year - my first one since going self-employed, it's on last year's earnings so thankfully it's not that big and I have just about 2/3's of it tucked away in the mattress, ha ha! It's another thing to be slightly concerned about innit?


4th August it rained. And I got wet, but I like rain drops - not on kittens with mittens though, 'cos that's basically not fair - especially when rain drops fall on water, like this: 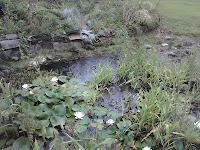 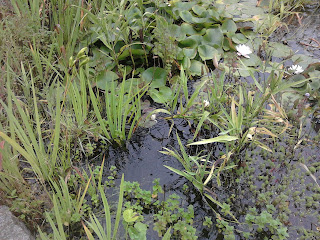 Some actual gardening for a change, a novelty on a blog about gardening - does one say "on" or "in" a blog? Anyway, I have today been attempting to control that weed of all weeds, Mare’s-tail. A bastard that grows like a big bastard in cultivated land.  I prefer the latin of course, being that way inclined(?), Hippuris vulgaris - fantastic latin innit? Well, my little sun flowers, it turns out that the bastard isn't mare's-tail at all but, indeed, 'tis Marsh Horsetail, Equisetum palustre - from equus, meaning horse of course and seta which translates as bristle or hair. Well, imagine my chagrine at that news. I can tell you, I pulled that weed up with ever increasing violence once I had found out it's true identity. Masquerading as another weed like that.


Basically, all you can do with it is move house...


Oh! More gardening, following is one of 8 pumpkins grown from last year's Halloween pumpkin as purchased from Tesco (yuck!).


Point is comrades, if you can get seeds from anything you buy at the supermarket and you have access to even the smallest bit of ground you can grow anything in the right conditions. A great way of sticking one on the corporates, 'cos you basically get it for free. I have 6 tomato plants from a Tesco bought pack of tomatoes too. They taste better than anything you buy - even if that statement isn't true, I believe it it's a psychological thing, they seem to taste better, fresh from the greenhouse, all lovely and warm...


Aha! here's a picture of all the tennis balls I found over this summer at Pat's place:


The grass at Pat's is looking a bit ragged at the moment. She has a separate company to come in and look after the lawn and it looks like the "treatment" has re-acted badly this year: 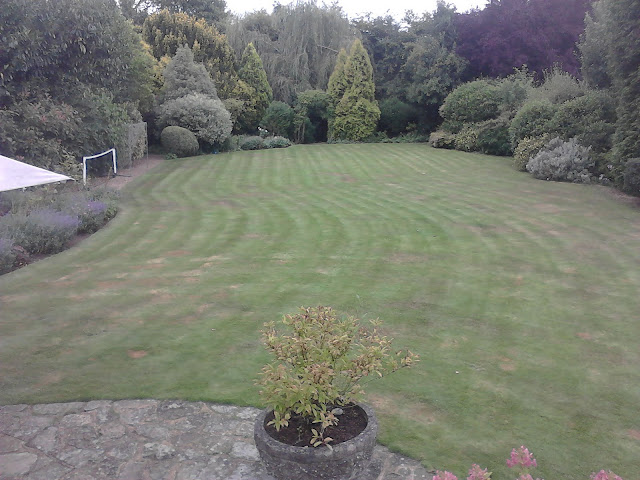 Those patches are all dead grass and there's not a lot of re-growth in them too. Sad, but with a bit of luck and a bit of feed and fertiliser in the spring it should be ok in time for next summer.


I have an announcement to make of a devastating nature. I shall just say it, so take care, my boots are dead.


Boots:  A sturdy item of footwear covering the foot, the ankle, and sometimes the leg below the knee.


Yes, 20 months into this new life of mine and already I have gone through two pairs of steel toecaps. These were a pair of JCBs, bought for £12.50 on E-bay (RRP - allegedly - £58.99), so I believe I got a damn fine deal there. The new ones are Dickies, apparently legendary footwear. Well, MR Marketing bloke, I shall be the judge of that. Here's the old pair:

Here's the new ones:


Actually, a boot's a boot innit?
And finally. Today it rained. It rained a lot. So much I actually had to give up and come home. Here's the evidence:
Happy drowning!
Peace innit?
Posted by SimonM-Isaacs at Thursday, August 18, 2011 1 comment: